A look at new audio products to be showcased

For the first time, the AES Convention and the NAB New York show are co-locating for a unified show at New York City’s Javits Center Oct. 19-20.

The annual NAB Show New York returns to the Jacob Javits Center after two years of pandemic absence. Its pro-audio counterpart, the AES, similarly suspended its in-person conclaves in 2020 and 2021, replacing them with virtual events.

“The tenor of this show will no doubt be different from the past, with parts availability being a constant challenge [for] introducing new products as well as supplying current ones,” says Joel Guilbert, technology development manager, Dale Pro Audio. “We’re looking forward to showing some interesting products that will inspire conversation about the future of audio.”

Here’s a look at some of the audio treats scheduled to be on display. 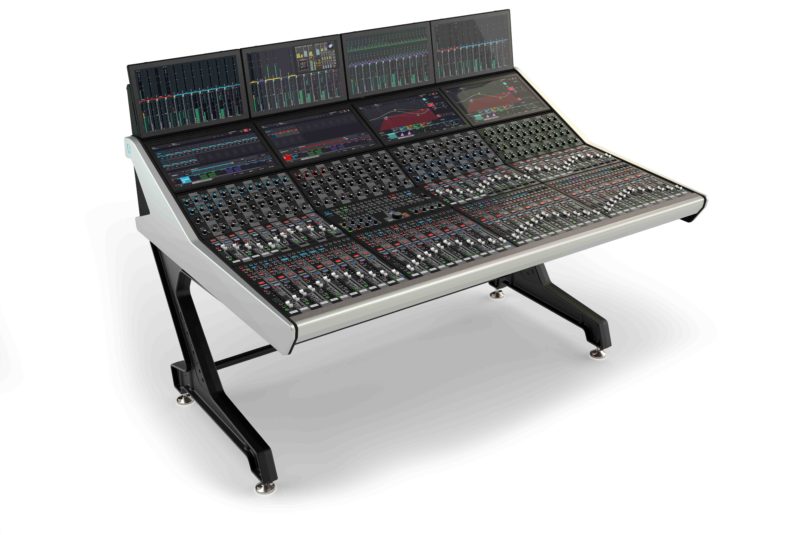 Calrec (Booth AES 418) will give its brand-new Argo mixing system its U.S. debut at AES NY. Launched at IBC in September, Argo is an IP audio mixing system and marks new approach to live mixing with an emphasis on adapting to different production needs. Argo has interchangeable modular hardware panels, can be located in geographically diverse locations, and is built around Calrec’s cloud-accessible Assist user interface. This means the user interface is the same whether you are working on physical hardware panels or on a remote GUI. Available in two frame sizes, Argo Q has two mid-level rows of interchangeable panels, and the compact Argo S has one mid-level row. Each console uses software templates to adapt the hardware panels to different user preferences. Argo is built on Calrec’s existing ImPulse IP core, so the processing core and control surface are not tied to any physical location. ImPulse can power up to four independent mix environments, including Calrec’s Assist headless mixer, which can be accessed over the public internet and provides access to more than 2,350 processing paths on a single console.

Clear-Com’s (Booth AES 628) V-Series IrisX panel will make its U.S. debut. The new panel expands the capabilities of the original V-Series Iris panel, delivering new thin-film-transistor (TFT) displays for increased brightness and better resolution combined with the V-Series Iris’s lower latency and increased port capacity. IrisX fits into IP-based productions with AES67 connectivity and dual-NIC connections. IrisX will also take advantage of role-based workflows, a new feature in EHX 13 that is unique in the industry and will be shown at the booth.

Additions to the available feature set for A__UHD Core and mc² consoles include signal-ownership groups for arbitrating shared network resources and health monitoring, featuring status displays of critical-system errors, warnings, and notifications displayed in the HOME and mc² user interfaces.

And the new Audio I/O Extender (AIOX) for the Power Core mixing engine provides in 1RU up to eight additional I/O card slots that can deliver up to 64 additional channels of I/O. As many as 20 AIOX units can connect to one Power Core, providing a massive 1,280 total additional analog or digital-audio inputs and outputs, plus GPIO.

Pliant Technologies (Booth NAB 1216) will be showing the new CCU-08 CrewCom Control Unit, which enables users to use up to eight 4-wire ports and retains all the same features of the current companion CCU-22 and CCU-44 products. The CCU-08 allows up to eight 4-wire intercom connections working simultaneously, permitting large-scale deployments. The latest CrewCom firmware update includes the recently released High Density mode, as well as support for the new CCU-08. Additionally, enhancements in the latest update includes faster configuration file (CCF) upload speeds and a new Radio Pack paired list that allows the user to view and manage, in a single software location, a list of all Radio Packs paired to each Control Unit.

The new High Density mode for both CrewCom and CrewCom CB2 wireless intercom systems will also be shown. High Density is a selectable mode of operation that greatly increases user densities. For CrewCom, this new software-selectable mode supports up to 32 Radio Packs (RPs) on a single Radio Transceiver (RT) while dynamically allowing any four of the RPs to communicate in full-duplex across four available talk paths. For CB2, the High Density mode supports up to 16 RPs on a single BaseStation. 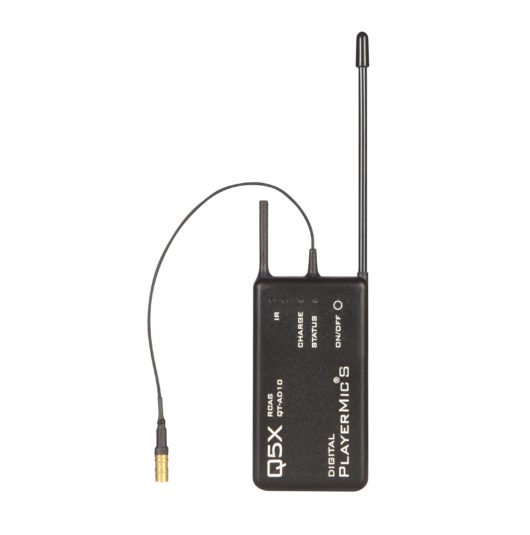 Q5X (Booth NAB 1615) will show newly released encrypted, Axient Digital versions of all Q5X wireless transmitters. They are compatible with Shure Axient Digital receivers, including the new ADX5D mobile receiver. The CoachMic features a robust, integrated, rocker-style mute switch and easy-to-see LED mute indicator, allowing users to mute audio for sensitive conversations. The PlayerMic, known for its flexible rubber packaging and thin profile, is both safe and easy to conceal beneath uniforms and jerseys. The waterproof AquaMic with 16-hour battery life is IP-68–certified to a 100-ft. depth, allowing it to be fully immersed in water or safely buried in the ground. These Q5X bodypack transmitters are all available in both Axient Digital and analog models. Q5X analog transmitters are compatible with Q5X, Shure, Sennheiser, Lectrosonics, and Wisycom analog receivers. All Q5X transmitters are 100% remotely controlled at distances exceeding 150 ft. via the handheld RCAS MicCommander or MicControl computer-based software. The latest version of MicControl manages both transmitter and receiver settings from the same platform. Analog and digital transmitters can share the same 2.4G RCAS control network for ease of operation. 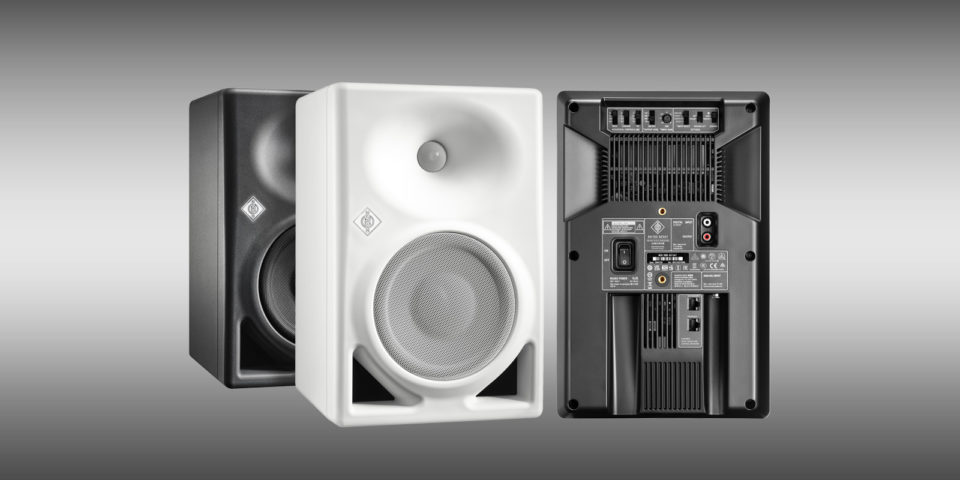 The Sennheiser (Booth AES 329, Demo Room 3D01) will be demonstrating a full 7.1.4 immersive system, including several stereo pairs of monitors for demonstrating the new AMBEO 2-channel spatial audio. Sister company Neumann.Berlin will host nine different presentations featuring recent immersive mixes on the Neumann immersive KH monitor system. Additionally, there will be product presentations on KH monitors, DearReality software and plug-ins, and Merging Technologies interfaces. Neumann will also demo its KH Line monitors, with the recently released KH 150 NDH 30 open-back headphones, and the reissue of the M 49; group member DearReality will be focused on its series of updates to its spatializer, monitoring, and mixing plug-ins. 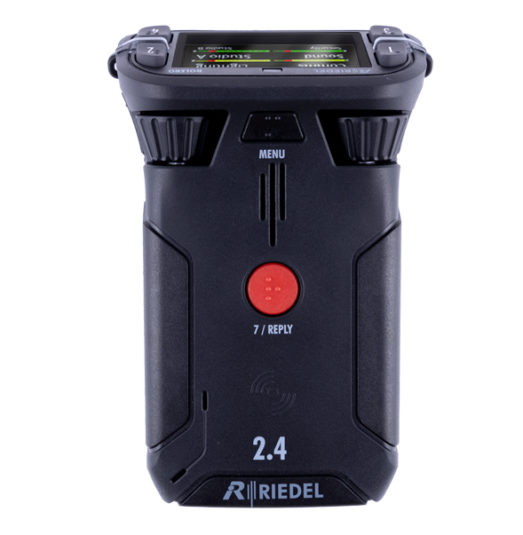 Riedel Communications (Booth NAB 1028) will showcase its new Audio Monitoring App (AMA) for 1200 series SmartPanels, along with innovations in its Bolero intercom product line, highlighting specifically the new Bolero 2.4 GHz. Via the new Audio Monitoring App, RSP-1216HL and RSP-1232HL SmartPanels offer audio-streaming monitoring, intercom, and control capabilities in a single keypanel. AMA allows direct connection to any SMPTE ST 2110-30 (AES67) audio stream available on the network — either dynamically managed via NMOS or in a static IP/SDP-based configuration, mixing the audio directly inside the SmartPanel. Users can monitor up to 16 stereo/mono streams in parallel. A total of 256 audio sources can be preconfigured and managed directly on the SmartPanels via high-resolution touch displays and intuitive interfaces.

Bolero 2.4 GHz, a new iteration of the Bolero product line, permits a hybrid solution with both DECT and 2.4 GHz frequencies for areas where DECT is limited. The 2.4-GHz iteration also comes with Bolero’s high-clarity voice codec and its multipath tolerant receiver (ADR) technology adapted to 2.4 GHz, allowing the system to continuously adapt to changing RF reflection environments.

RTS (Booth NAB 1315) will show three flexible redundancy options now available for multi-frame ODIN digital intercom matrix systems: the Backup and Restore function in RTS AZedit software can be used to upload and save the complete configuration of an ODIN frame to a file, from where it can be applied to another frame. Frame Swap is used to replace a single frame in a multi-frame ODIN intercom system. Redundant Frame Operation supports two modes: One-to-One Redundancy and Intelligent Redundancy. In either mode, the system can be configured for automatic transfer of control (a redundant frame takes over automatically when it detects a failure) or manual transfer (a redundant frame takes over only at the direction of the user). 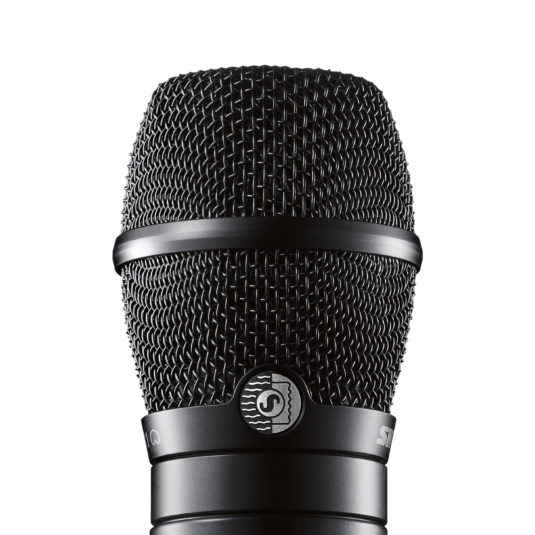 The UniPlex cardioid lavalier microphone is engineered to be the discrete solution for speech applications where rejection of noise, audience, or close-proximity presenters is essential to conveying the message. UniPlex 1.6-mm Shure Plex Cable technology ensures long-lasting durability and comfort for the wearer, while making it easy for crews and engineers to apply the mics effectively and efficiently. The cable is immune to kinks and memory effects, resulting in unmatched performance thanks to innovative spiral construction with redundant shielding. The cable is also a fully paintable, versatile solution suitable for any speaker or wardrobe.

For decentralized and distributed remote audio production, SSL’s System T and Network I/O break down into I/O, signal processing, and control software — all distributed across networked devices and computer. System T software can run on control surfaces, SSL rack-mount controllers, COTS computer hardware, or virtual machines. System T control software is a set of applications, rather than a single app; inter-app communication is also performed using standard network data. Physical console surfaces or software instances running on users’ computing hardware can remotely control the console at a facility via a VPN. All control positions use the same GUI design, for a unified user experience.

Evertz/Studer (Booth NAB 1025) will introduce Studer’s Vista 1 Carbon, a compact 22-fader console that is the latest addition to the Vista console range. Designed for live events, broadcasts, and remote and outside-broadcast (OB) productions, Vista consoles offer a DSP engine with more than 1,000 channels and buses and more than 6,000 physical I/O. Evertz will also showcase the new Studer Infinity-ST server core, which features a new CoreLink card audio interface that provides both IP-based ST 2110-30 and Studer proprietary A-link native connectivity. With more than 6,000 I/O, the Infinity ST 1100’s CPU technology also offers 1,100 simultaneous DSP channels and buses to mix; the Infinity ST550 provides a cost-effective alternative for application not needing the higher-level horsepower. Completing the Evertz/Studer line is the Micro Series, a high-end digital audio-mixing system in a compact, cost-effective package.

Wheatstone (Booth NAB 1518) will display its new Layers broadcast software suite, which runs on commodity servers. With Layers, one server located at a facility can spin up or spin down mixing, processing, and streaming instances locally or remotely. Backend mixing in an instant and audio processing and stream provisioning in an instant can be controlled from a laptop or tablet, again remotely or locally, with no other hardware required. Layers includes “glass” software for the laptop or tablet and server software for mixing, routing, logic, and FM/HD audio processing, with full MPX out to the transmitter as well as provisioning and metadata for multiple streams out to the CDN provider. Layers combines the scalability of Hewlett Packard, Dell, and other commodity servers with the reliability of WheatNet-IP audio networking, a complete AoIP system with console surfaces, virtual tools, routable audio codecs, and processing.

In related news, the Media over IP Pavilion will be back at AES New York, and, at the Media over IP Theater, the AIMS Alliance and AES will offer more than 20 30-minute sessions on key topics in media networking, such as transporting AES67 through public cloud infrastructure, the AES70 control architecture, designing with Dante and AES67/SMPTE ST 2110, and network design.