Both broadcasters to expand miking to officials, deploy rules analysts

The NHL season is off and running, and there are lots of changes on the air for hockey. Warner Bros. Discovery Sports (formerly Turner Sports) is in the first year and ESPN is in the second of the broadcasters’ respective seven-year rights agreements with the league, and each continues to evolve its audio philosophy.

For WBD Sports, a Legacy Brand and Audio Team

The newly named WBD Sports, which is retaining the NHL on TNT branding, will rely on many of the same audio personnel from the league’s previous 15-year stint on NBC Sports, including A1s Tim Dunn, Randy Peckich, and Doug Deems.

WBD Sports will be using Q5X PlayerMics for players, although officials won’t be wired for sound this season, says Lee Estroff,director, technical operations, WBD Sports. However, on occasion, the audio team will bring in what has become a TNT audio signature, in the form of the Shure MXA710 microphone arrays that WBD Sports Senior Audio Supervisor, Remote Operations, Dave Grundtvig has adapted from corporate boardrooms to numerous sports in the past two years. Those, Estroff says, will be deployed for the tentpole games, including the Winter Classic, which on Jan. 2 will be played in Boston Red Sox’s Fenway Park, the oldest baseball park in the major leagues but one catching up to sports-sound trends with a complement of three DJs.

“We’ve already used those for baseball; that was a big step and will help us deploy them effectively for the Winter Classic,” he says, adding that Dunn has already been at MLB games in Fenway scoping out the venerable venue for its audio anomalies. “We’re planning on having some other new ideas ready for the Winter Classic, too.”

This season NHL on TNT will also have the remote input of former veteran NHL official Don Koharski as on-air rules analyst, working from the network’s Atlanta studios.

ESPN Gets Up Close and Personal

According to Dan “Buddha” Bernstein, lead A1 on ESPN’s productions, the broadcaster is building on audio foundations put in place last season and adding a few new ones this year. For instance, the players wired for sound last year, also with Q5X PlayerMics, will be joined on-air by officials wearing the Q5X RefMicHD transmitter.

“Last year. that audio was all for replays and packages,” he says, “but we’ve been easing into also using it live this season. We built trust last year with the league and the players and the officials, which has paid off.” 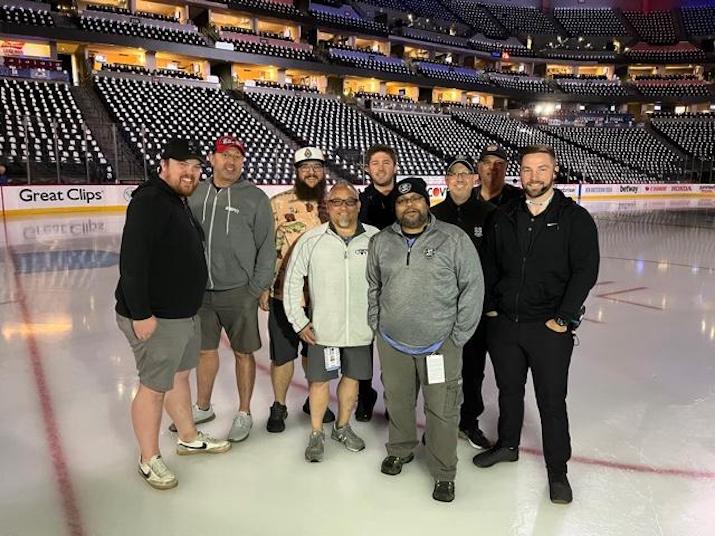 Bernstein — who is working with A1s Mark Skipper, Florian Brown, and Andy Bartley, lead comms technician Eric Williams, and lead RF tech Abi Sehgal — says the strategy has been to ask the teams to recommend their more “animated” players for miking. The goal is to season conventional hockey sound effects with some of the players’ own in-game experiences, the sound drawn from their perspective during play.

“We’re not looking for the sound of ice and skates through those microphones,” Bernstein notes. “We’re getting plenty of that from our effects mics around the rink. We’re listening for what a particular player is hearing during the game.”

Speaking of effects microphones, the broadcaster is again deploying three microphones inside each goal net. They create a left-front, right-front, and synthesized stereo center that Bernstein says creates an audible sense of movement within the goal for viewers.

“It sounds enormous, as though you were actually in the goal,” he says. “The live action around the crease is evident.  It’s not just skates and pucks; you’re also hearing the goalies directing the action. It’s pretty spectacular.”

Other new wrinkles this year include mobile Dante kits that connect in-venue nodes such as announcers between the benches and RF receiver locations to the remote truck over MADI, reducing cabling and manhours within the venue. The technique was used on selected shows last season, but enough kits are being assembled to extend their use to all of the games.

All these elements combine to create what Bernstein calls a creative canvas for hockey’s audio.

“It’s a tremendous opportunity for creative sound design for sports on television,” he says. “Hockey is an exciting and dynamic-sounding sport, and we’re doing everything we can to accommodate and communicate that.”