The 2022 WNBA Finals (ESPN, ESPN2, ABC, ESPN.com) from Las Vegas’s Michelob ULTRA Arena was broadcast in 5.1 surround, but the production was one in which the WNBA’s sound achieved technological and strategic parity with the NBA and other major leagues in other ways as well. Like its male counterpart, the WNBA Finals — won by the Las Vegas Aces, who defeated the Connecticut Sun in Game 4 of the best-of-five series at Mohegan Sun Arena —featured at least one player from each team fitted with a wireless Q5X PlayerMic RF transmitter, and both head coaches and the game referees wore Q5X’s CoachMics and RefMics, respectively, a process it began earlier in the season. (The WNBA’s marketing term for this array of wireless audio is, ironically, “WNBA Wired.”) 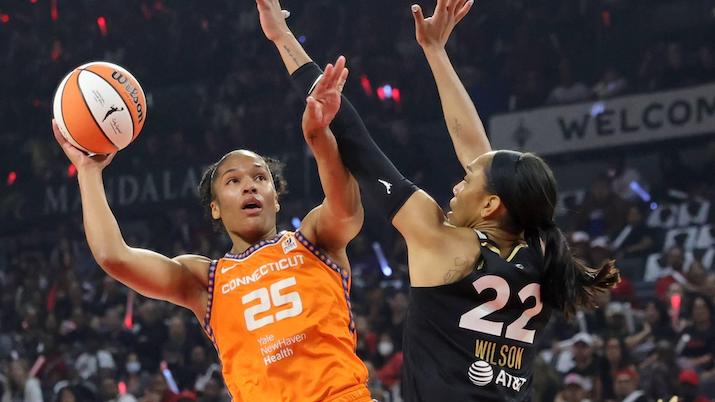 “That kind of parity had been a goal for us, to have the production reach a level of other major championships throughout; that was important for us,” says Michael Sullivan, remote operations specialist, ESPN. “We’ve worked this entire year for this so that we can showcase the league at the highest level, bulking up the technical resources of the WNBA Finals this year, both from a video and an audio perspective. It’s especially important for us to achieve that at a time when our [viewership] is up 50%-60% in some rounds. The fans are coming, and audio is an important part of that.”

Another aspect that the WNBA Finals seem to have in common with the NBA is sheer volume. Sunday night’s game had an ambient noise level in excess of 90 dB and reached as high as 105 dB at certain points. In fact, the combination of crowd noise and music in the arena completely overwhelmed televised basketball’s most fundamental sonic element: sneaker squeaks.

ESPN A1, NHL productions, Dan “Buddha” Bernstein was brought on as the lead A1 for the WNBA Finals, with Mark Skipper managing Riedel comms and Steve Simone on RF management. According to Bernstein, the WNBA Finals featured a slew of SFX capture, including eight Sennheiser 416 shotguns around the court, plus Sony ECM-77’s on the nets and the far table. Sennheiser 418 short stereo mics (configured as M/S) were on all handheld cams (three wired, two wireless). Crowd sound was picked up by a pair each of Shure SM81 and Audio-Technica AT-5100 condenser microphones, providing most of the 5.1 rear-channel content.

“Dan brings that NHL and NBA mentality about the sound to the show,” said Sullivan prior to the event. “Also, from an announcer perspective, we have an additional reporter, Holly Rowe, and then we have Andrea Carter, who will act as a sideline analyst. We’ve got additional talking heads and reporters around the court in addition to an enhanced mix on the overall court.”

According to Sullivan, the expanded “Wired” infrastructure for player, coach, and officials audio was built in cooperation with the NBA — the league for which Q5X originally developed the PlayerMic in the first place — and led out to the broadcast compounds, where Game Creek Video RiverHawk was the hub for the Las Vegas matches, Justice for the Connecticut games.

“Something that we have done this year to enhance the audio is that we’ve added more microphones to [‘Wired’],” he says. “In past years, we weren’t miking as many sources; now it’s a much larger kind of wired setup just to make sure that we are bringing the emotion to the viewers at home throughout the game.”

In terms of production, ESPN integrated the onsite audio seamlessly between the remote trucks and its Bristol, CT, facility. For the first two games, cameras and microphones were encoded in Las Vegas through RiverHawk and sent to Bristol, where the studio show was produced.

“All of the studio microphones, all the studio IFBs will have complete integration to where we can throw from studio talent to game talent and have conversations throughout the show to engage those analysts’ and announcers’ expertise as well,” said Sullivan. “Even though there’ll be two completely different shows from a game broadcast in a studio broadcast, it’s all kind of one centralized compound and one kind of centralized audio infrastructure.”

Sullivan cites other enhancements for the WNBA Finals production, for which as many as 25 cameras were deployed, including two roaming RF cams, what he calls a “significant” Fletcher component, and remote POV cameras near the basket rims and the scorers table. In addition, ESPN also tested a handheld MōVI camera that can mimic a RailCam-type look, using a camera/lens combination that occupies a smaller footprint than a typical RailCam and was installed along the court’s edge. The visual elements combined with audio to create the overall experience, he says.

“I think it’s about how we enhance the audio that we have and how we present that audio in a creative way to where video and audio come together to create a unified experience,” Sullivan says. “We’re trying to build out an entire infrastructure where it gives us production creativity, where we put announcers, how they’re contributing to the broadcast, and then how that game and how that broadcast sounds at home. It’s all one presentation.”