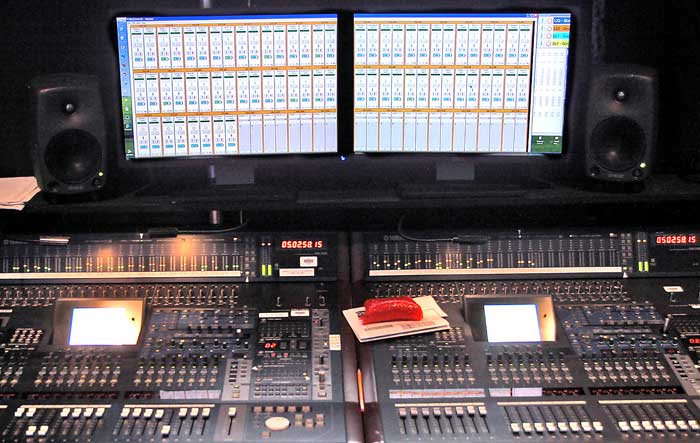 The Radio City Music Hall TapShoeMicTM project began during the 2009 Christmas Spectacular season with 150 remote control wireless transmitters and was doubled this year to a total of 300 transmitters and 80 receivers. “The wireless TapShoeMicsTM are unique to Radio City Music Hall and reflect our commitment to investing in new technology in efforts to deliver the best audience experience possible.” Says Larry Sedwick, SVP Productions, Madison Square Garden Entertainment.

The TapShoeMicTM is a customized version Q5X’s remote control transmitter used in the rugged QT-5000 Playermic® which was developed for professional sports.  This implementation has a special housing for attachment to the tap shoe and an integrated rechargeable lithium-ion battery.

The RCASTM software allows remote control of the settings and monitors the status of all 300 transmitters from a central computer via a 2.4GHz radio frequency control channel.  This capability enables audio technicians to turn microphones on/off and make on-the-fly adjustments to frequency and audio level during a performance.  More importantly with New York City’s crowded RF spectrum, it allows multiple groups of transmitters used at different times in the performance to easily share the 80 receivers and associated frequencies without the need for an audio technician to touch the transmitters.  The RCASTM with shared receivers is the only practical way to implement 300 transmitters into a single show.

“Quantum5X is proud of our partnership with Radio City Music Hall and our accomplishment in implementing this very demanding project.” says Paul Johnson, CEO, “The TapShoeMicTM has succeeded in one of the most difficult environments imaginable.”

Quantum5X Systems Inc. (Q5X®) is an award-winning London, Ontario, Canada corporation that specializes in the creation of leading edge, wireless audio technologies for the broadcast, sports and entertainment sectors.  Breakthrough products include the QT-256® The world’s smallest broadcast quality wireless microphone and the QT-1000 Playermic® The world’s first and only rubber, wireless microphone. Q5X®clients include ESPN, FOX, Comcast, Turner, Disney, TSN, CTV, CBC, ABC and CBS, as well as MLB, the NHL and the NBA.