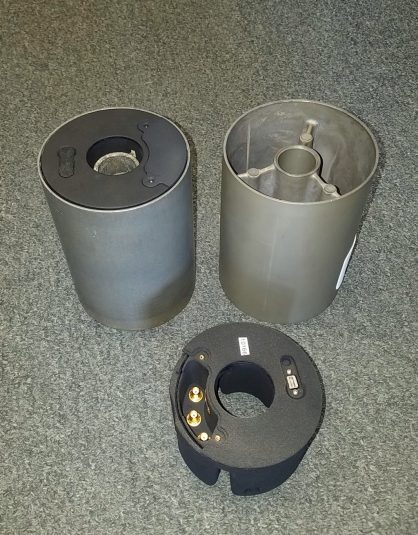 Ace in the Hole
Fox Sports deployed the new version of the Golf Hole Mic for the U.S. Women’s and Seniors’ Open the preceding week, fine-tuning this broader application of a revamped product. For the first time, Golf Hole Mics are placed in all 18 holes on the course at Shinnecock. Thirty-six are on hand, rotating through the five-day tournament, with one set recharged as the greens keepers bring the other set in for recharging.

The Quantum5X-developed mic has come a long way since its first appearance at the 2015 U.S. Open. Back then, a combination of water and form-factor issues made for a bumpy debut. According to Q5X CEO Paul Johnson, in the current version of the Golf Hole Mic, a waterproof 3D-printed insert houses the transmitter beneath the actual cast-aluminum golf cup. An integrated antenna and a Countryman B6 mic element at the upper lip of the insert pick up audio from several yards around the hole.

Course-wide wireless-system management is done by Professional Wireless Systems (PWS). The Golf Hole Mic has remotely controlled level and battery management: once a unit is in place, it doesn’t need to be touched until the end of each day’s play, when all are collected for recharging.

“One of the big challenges of putting a microphone and transmitter into a golf hole is water,” notes Johnson. “This version of the Golf Hole Mic is engineered as a single unit that keeps moisture out of the electrical components while still letting it drain out of the hole and also keeping any elements out of the way of the ball.”